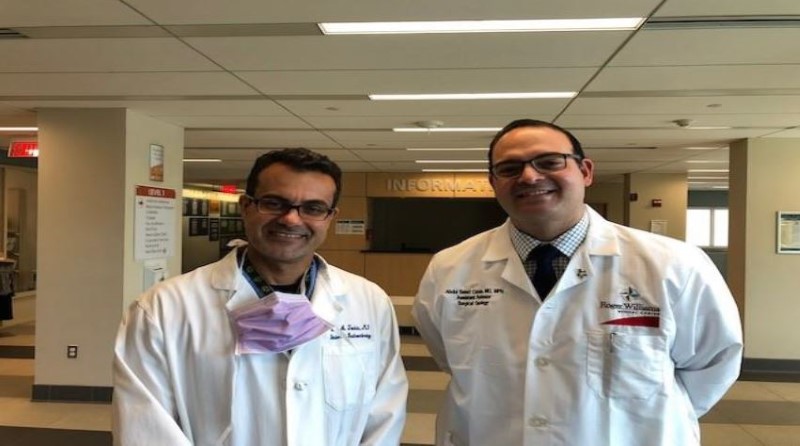 There is a first-of-its-kind procedure in Rhode Island to ease symptoms in cancer patients.

It started when a man came to Roger Williams Medical Center a few months ago with a blockage in his digestive system. It had been caused by a duodenal cancer, which is a rare cancer in the gastrointestinal tract. Two doctors put their heads together to come up with a solution for him.

We were trying to think outside the box because we didn’t have many options,” said Dr. Abdul Saied Calvino, a surgical oncologist at Roger Williams Medical Center.

“We wanted to deliver good care for him, efficient care for him, but also get him back to his chemotherapy,” added Dr. Nabil Toubia, a gastroenterologist at the hospital.

Working together, this team needed a solution for a patient who’d already been treated for his duodenal cancer.
“The first surgery solved the first obstruction of the duodena, but the loop that was created by the surgeons up in Boston ended up being obstructed again,” said Toubia.

So, instead of major surgery, they used a lumen-apposing metal stent approved by the FDA to drain pancreatic fluid collections, off label, to improve the patient’s symptoms. No surgery, no incisions.

“We were able to find a very narrow window that allows access to the loop of bowel, providing endoscopic ultrasound to drain it,” said Toubia. “The procedure took 20 minutes to do. Alternatively, this could have been a large surgery with many days in the hospital and perhaps with not good wound healing because of the chemotherapy.”

“This is pretty much like having an extra tool in our toolbox that we can use to help patients and let them recover faster,” said Calvino.