Skip to Main Content
Home / News / “Pain was Unbearable. Would Surgery Fix It?”

“Pain was Unbearable. Would Surgery Fix It?” 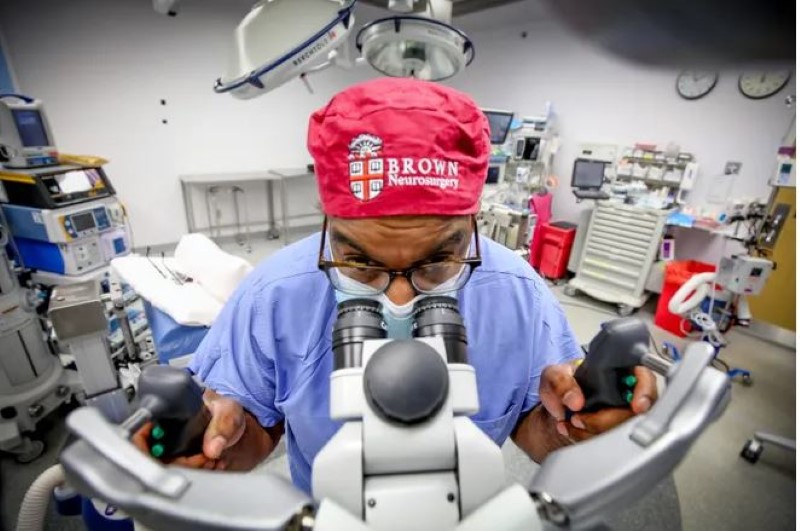 by Mark Patinkin, The Providence Journal

READ ARTICLE IN THE PROVIDENCE JOURNAL

At first, the patient tried epidural steroids. The initial shots helped for a few months, but later ones did little. The pain became unbearable at times, like embedded railroad spikes from his back to lower leg. It even affected his walk, his foot dropping a bit with each step because signals to the elevator muscle had been impinged.

He, at last, faced that it had to be addressed surgically.

A doctor friend advised that he find someone with a balance of caution and courage—the restraint to avoid too much intervention, but the confidence to be bold if needed.

Prakash Sampath grew up outside London, son of a computer scientist father who’d immigrated there from India in the 1960s. Sampath went to a British boarding school, then his dad moved the family to the U.S. to take work with the space program here.

Sampath went on to study biomedical engineering as an undergrad at Johns Hopkins in Baltimore. Afterward, he spent a few years doing neurology research, then got into Columbia University medical school.

He grew intrigued with neurosurgery as a specialty; the brain and spine still had many unknowns, and he liked that challenge.

After a long fellowship in neuro-oncology back at Johns Hopkins, Sampath was recruited by Lifespan in 2000 to head Rhode Island Hospital’s brain tumor program. In 2006, he became chief of neurosurgery at Roger Williams Medical Center, but his talents were so sought-after that in 2020, he was hired again to practice with Brown/Lifespan Neurosurgery as well, splitting his duties between the institutions.

Bent over the patient, Sampath cuts through skin and fascia, cauterizing as he goes to stop bleeding. In larger patients, it can take up to an hour to get through fatty tissue, but this goes quickly. Then, with a retractor, he draws back the lower back muscles four inches to expose the bony spine. … He would be operating near the spinal cord, among the most perilous parts of the body for a surgeon, along with the brain, but Sampath is calm. He’d spent seven years in post-med school training, and rooms like this one are, in essence, his office. They are where he does eight to 10 spine and brain surgeries per week, the brain work usually involving cancerous tumors. … At last, it’s clean, the nerves freed and movable again. Sampath knows what a difference it will make. It’s the most satisfying part of his job—fixing patients who have profoundly disabling ailments.

Finally, they are done. Sampath closes and sutures the site. Not long after, he is on to another surgery. This was just one part of his day.

But what a difference it made to the patient. To myself. I’m writing this now because the operation took place about a decade ago. I haven’t had any pain or limitations since. I am guessing it’s uncommon for patients years later to let a surgeon know how much they changed a life. This article is my way of thanking Dr. Prakash Sampath.